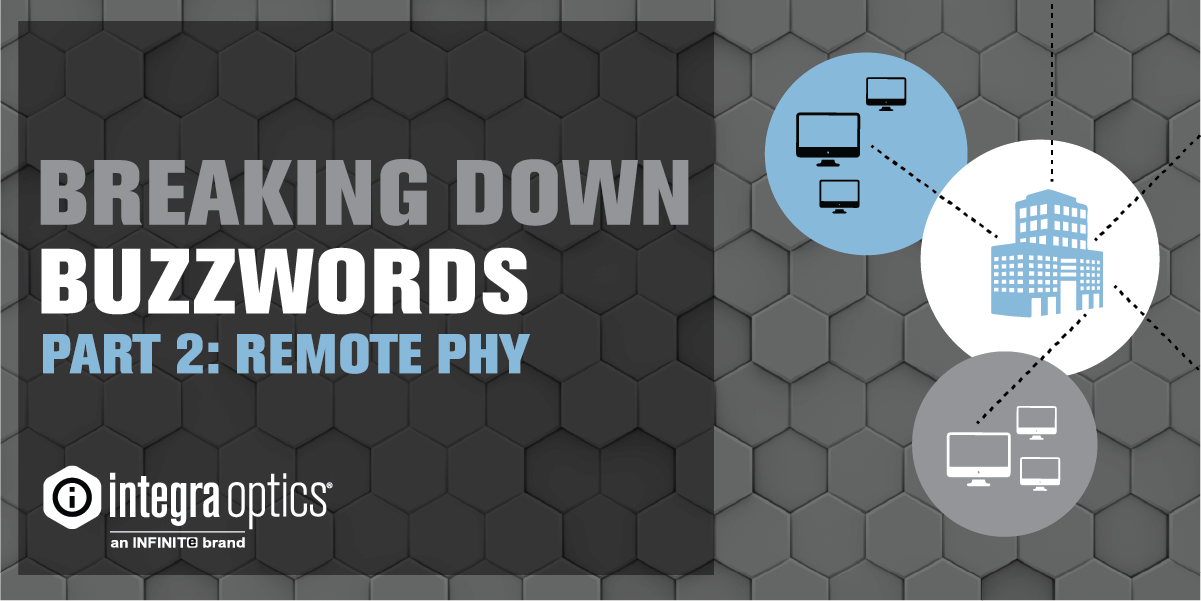 In part one of our “breaking down buzzwords” series, we dove into the details of Fiber to the What?! (FTTx). In part two of this series, we breakdown another hot topic that our customers, and the industry, have been buzzing about: Remote PHY.

Remote PHY (often truncated to R-PHY or RPHY) is a key element in a service providers’ evolution to a Distributed Access Architecture (DAA): moving the physical (PHY) layer component of the converged cable access platform (CCAP) out of the cable headend towards the network edge. The Remote PHY device (often referred to as the RPD…. yes, an acronym within an acronym!) provides the data and RF functionality (QAM modulators/demodulators) closer to the end customer equipment and communicates back to the headend through a digital optical link.

In layman’s terms: after all the routing and switching magic happens in the core, the final signal that is delivered to the end customer is produced by a Remote PHY device, rather than in the headend.

Considering that the first part of CCAP is “converged”, one may wonder why we would now move the R-PHY functionality out of the CMTS? The short answer: GROWTH! The insatiable demand for subscriber bandwidth has put ever increasing demands on the space, power, and cooling requirements in the hub. Remote PHY helps to alleviate this by distributing much of the physical layer functionality to the fiber nodes. Additional advantages to R-PHY are:

The “Remote” part of R-PHY provides flexibility in how and where the RPDs are deployed: from deploying in an existing node location as a more traditional node segmentation effort, to a more novel “fiber deep” location serving as few as 50 homes and providing unprecedented services to the customer.

How does this all get back to the headend? 10G DWDM optics, forever the workhorse of long-haul optical transport! The evolution of DWDM optical technology from its origins in long-haul amplified networks to the “commodity” world in access technologies has been one of the critical enablers for Remote PHY and the fiber deep architecture.

The initial R-PHY spec was introduced by Cablelabs back in 2015. It wasn’t until 2017 that the first R-PHY based cable systems started to go live (primarily in Europe), with scale worldwide deployments ramping through 2018/2019. For most providers the question is not “if” but “when”, and how to address the learning curve with such an architectural change. A key element supporting the push of digital optics (particularly DWDM optics) deeper into the traditional cable access networks is a close partnership with your optical provider.

Driven by the ever increasing consumer demands for bandwidth AND flexible services, and aided by the migration of DWDM optical technologies from transport into access realms, expect to see and hear R-PHY buzzing around the water cooler even more.

Ready to see how you can best implement Remote PHY? Talk with one of our experts today to understand the benefits of how we can offer a solution that provides flexibility the OEM can’t.