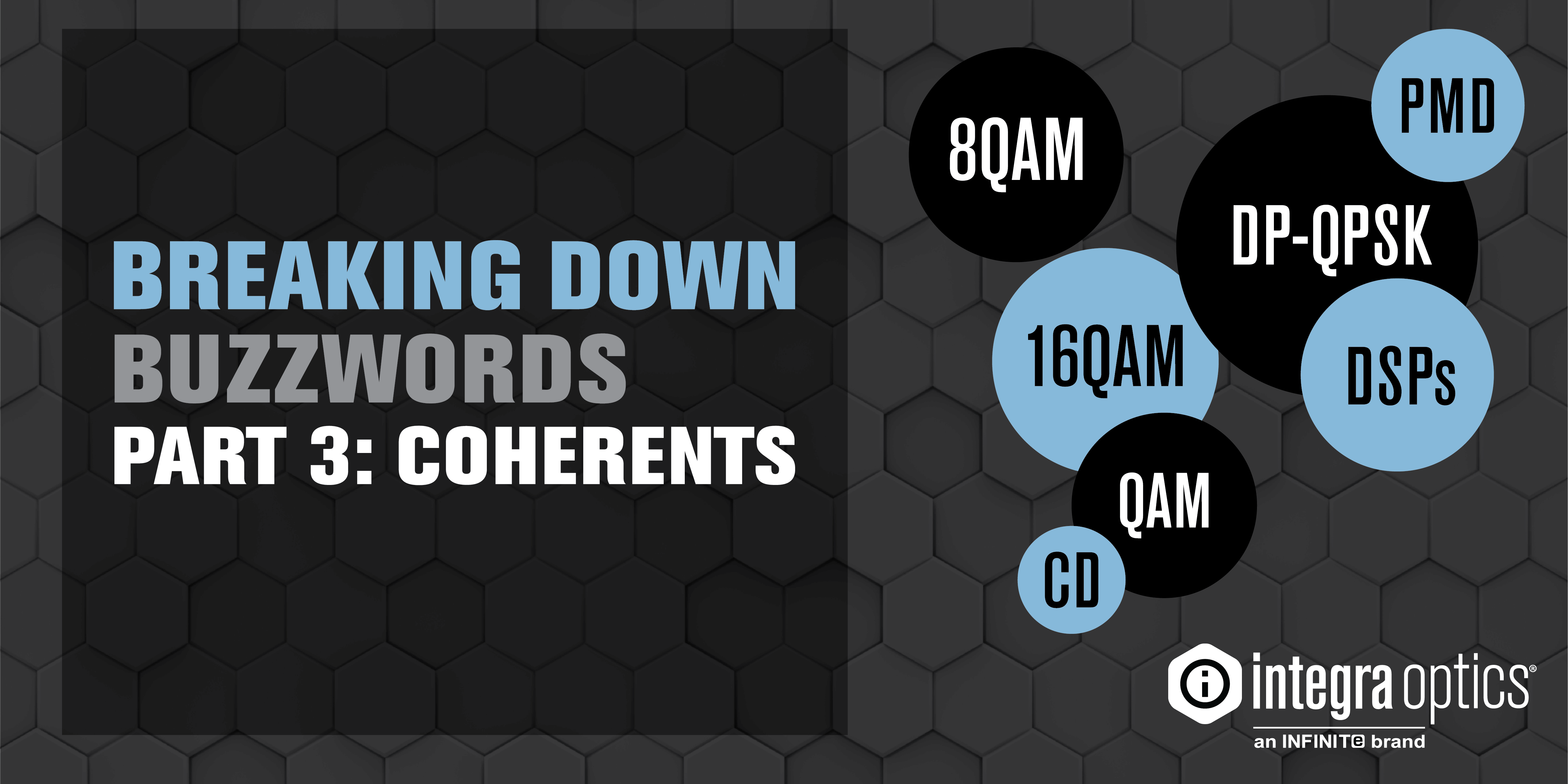 Throughout our “Breaking Down Buzzwords” series, we have taken a look at Remote Phy, and FTTX. To continue our series, let’s dive into coherent optics and attempt to provide a simplified (and, dare I say, coherent) explanation of some of the common terms and acronyms associated with this optical solution.

Before we dive into the details of what a coherent optical transmission is, let’s first look at why we are talking about it in the first place. It all comes down to bandwidth and how we continue to increase the data rate of optical transceivers. Until recently, the vast majority of optical transmission has been based on direct detection at the receiver. A direct detect receiver looks only at the optical amplitude of the incoming signal, which means that the data rate is limited to how quickly the light can be switched ON or OFF. This is one of the simplest and most common modulation techniques to transmit ‘1’s and ‘0’s via an optical signal. NRZ (Non-Return to Zero) and PAM4 (Pulsed Amplitude Modulation, 4-levels) are primary examples of direct detect based modulation protocols in use across the optical industry.

Higher order modulation techniques allow us to increase the data rate by encoding information not just in the laser amplitude, but also in the phase and polarization of the light signal. You may be seeing a veritable alphabet soup of modulation formats associated with coherent optics such as Dual Polarization Quadrature Phase-Shift Keying (DP-QPSK) and Quadrature Amplitude Modulation (QAM, 8QAM, or 16QAM). Simply put, these are all known methods for encoding more bits per symbol, and they have been common in the radio/RF industry for years.

However, to use these techniques in optical transmission, we need a smarter receiver. The ability of the receiver to perform coherent detection and extract information from the phase and amplitude of the signal is the source of the term “coherent optical transmission”.

A coherent optical receiver actually uses its own laser (yes, now there is a laser at bot the transmitter AND at the receiver), also known as the Local Oscillator (LO), to mix with the incoming signal. This allows the receiver to determine amplitude and phase information of the detected signal which is necessary for higher order modulation techniques. A pair of Digital Signal Processors (DSPs) at the transmitter and receiver end of the link perform the complex modulation and demodulation operations to encode/decode the data stream.

In addition to the higher data rate, coherent transmission also addresses many of the chromatic dispersion (CD) and polarization mode dispersion (PMD) impairments that have limited the transmission distance of current direct detect 100G transceivers, opening opportunities for 100G links beyond 80km.

It has often been the case in the optical industry that coherent optics have evolved from their line-card based origins to the integrated CFP and CFP2 transceiver modules offered by Integra Optics today. Continued investment in optical and silicon integration will drive coherent optics into additional crucial form factors such as QSFP-DD. Integra continues to lead the way in providing early access and competitive optical solutions.

Reach out to your sales representative or talk with one of our optics experts to learn more about which coherent solutions that are right for you.